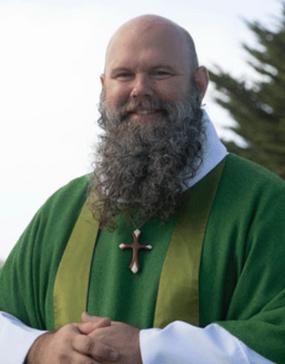 Raised a United Methodist in Meridian, MS, he was confirmed at The Episcopal Church of the Mediator in Meridian between semesters as a student at Duke University's Divinity School. After receiving his MDiv from Duke,  he made his way to California and was active at Saint Michael and All Angel's in Concord. In 2007, Michael completed the Certificate in Anglican Studies course at Church Divinity School of the Pacific (CDSP) and began coursework for his doctorate that fall.  During his two years in residence at CDSP, he interned at St. Giles in Moraga.

While at St. Clement's Honolulu, Michael completed the Doctor of Ministry, writing on the spirituality of pilgrimage  one of his favorite memories is making the pilgrimage to Santiago de Compostela!

Since joining Good Shepherd, and our partner church, Holy Family in Half Moon Bay, Vicar Michael has been involved the Belmont Chamber of Commerce, and elected to serve on the Standing Committee of the Diocese of California. Each year he spends a week at the Anglican Convent of Nazareth in Tokyo in prayer and meditation, study, and renewal.  If you would like to share your spiritual journey story with Vicar Michael, he would be a willing listener and gladly treat you to a cup of tea or coffee.  He is available for pastoral consultation as well, and is willing to be contacted about funerals, weddings, baptisms, and other important stages in your life.